Today was my first official “company” rehearsal…although I didn’t do much rehearsing. I watched and videoed so that I can learn these “staple” dances on my own. I’m not sure when I’ll be slated to perform…I’m itching to do it again, but I don’t see anything for a while. I’m glad to be included in the rehearsals…but I’m still feeling just a tiny bit like the outsider girl.

It’s slowly taking over my life – this dancing business. All morning on the train to class I was choreographing a solo number in my head. To Garbage’s #1 Crush, btw. I was dreaming of a glittery, elaborate costume during class, and spent a good deal of time this afternoon trying to figure out how I’m going to get the $195 to take the solo class (and how much more for the costume itself?).

As much as I love it all, it does give me a sense of anxiety though. Because I start thinking: I’ve picked up my life to go to graduate school here – I’ve left everything and everyone I’ve ever known behind for this. And I’m being distracted by burlesque? I do love my classes and what I’m learning and I am genuinely interested in learning about agents and themes and predicates and non-finite clauses…I dig it. But I’m all wrapped up in my Ada life, in the sparkle and glitter and glam of it all. I want both…but I don’t really see how I can be both, not really. Do proper, responsible ESL teachers who are concerned about their immigrant students really spend their nights on stage taking off their clothes? They can’t both occupy equal parts of my life, right? Something has to give sooner or later, I think. I’ll pass on something so that I can keep going to rehearsals…or I won’t and I’ll have to give it up. Right? Can we ever keep the juggling act going forever? 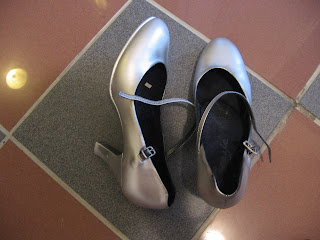